WAY BACK MACHINE: The Rough & Tumble Preachers in Revolutionary Times

By Secrets of the Eastern ShoreAugust 8, 2019No Comments

Home / From the Books / WAY BACK MACHINE: The Rough & Tumble Preachers in Revolutionary Times

This excerpt from Eastern Shore Road Trips #2: 26 MORE One-Day Adventures on Delmarva is one brief part of a chapter focused on history-laden Accomac, Va., which has a gorgeous old town square and side street full of sweet old houses and beautiful gardens.

When the Revolutionary War broke out, most Methodist ministers fled back to [their home country of] England, fearing for their safety. Francis Asbury was not the fleeing type. He holed up at Barratt’s Chapel just north of Frederica, Del., and set about reinventing Methodism as an all-American movement.

This new faith didn’t go after rich and educated converts. Asbury recruited homegrown missionaries who spoke the language of common people and knew their culture and traditions. The first of those missionaries sent to visit this part of Virginia gave up after getting lost in the vast, spooky cypress swamp that then covered much of Maryland’s lower Eastern Shore. A second preacher, Freeborn Garrettson, got lost there as well, but he didn’t give up. Legend has it that he came across a local man in that swamp and asked him if he knew Jesus Christ.

Sir, I don’t know that man, and can’t tell you where he lives. 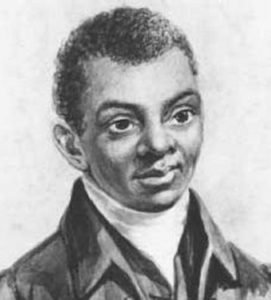 Garrettson preached in Accomac, Va. while the Revolutionary War was still going strong, in 1778. The famous Asbury himself visited in 1783 and 1784. During this period, he was often accompanied on his travels by Black Harry Hosier. Born into slavery, Hosier was given his freedom by his owner, a Methodist convert. He landed at Asbury’s side after that, at first taking on the duties of a paid servant. He was illiterate, but he had a wondrous gift. During long travels together, Asbury would read scripture aloud, and his every word was instantly imprinted on Hosier’s photographic memory—or audiographic, to be more precise.

In time, Asbury started letting Hosier preach to black audiences. Then he had Hosier address white audiences, too, as a kind of warm-up act. On more than a few occasions, Hosier proved the more popular of the two. He was probably the first black man to ever preach in white churches in this country.

[Black Harry] possessed a most musical voice, which he could modulate with the skill of a master, and use with the most complete success in the pathetic, terrible, or persuasive parts of a discourse. … He was never at a loss in preaching, … and few of the white preachers could equal him.

A Preacher Ready for Fisticuffs

The Methodism preached by Asbury, Garrettson, and Hosier was really the heart and soul of the Second Great Awakening, a nationwide revival that grew so intense that many people were certain the Second Coming was nigh. But early on here in Virginia, such Methodist ministers endured a less than welcoming atmosphere. In the town of Belle Haven, Rev. Joseph Everett found himself face to face one day with a crowd that had a surly, inhospitable look. He took off his coat, rolled up his sleeves, and flexed a bare bicep.

Men of Virginia, this is old Everett. Look at him. He has large arms and willing muscles, and always feels ready to stand up for the cause in which, by the grace of God, he is now enlisted.

Everett went on to preach without interruption that day. In the end, the message he and his Methodist colleagues delivered won the day in Accomac and on the whole Eastern Shore of Virginia, where Methodism would soon become the most popular faith by far—a status it retains today.

• Here is where you can learn more about the book Eastern Shore Road Trips 2: 26 MORE One-Day Adventures on Delmarva, including where to buy it in stores and online.