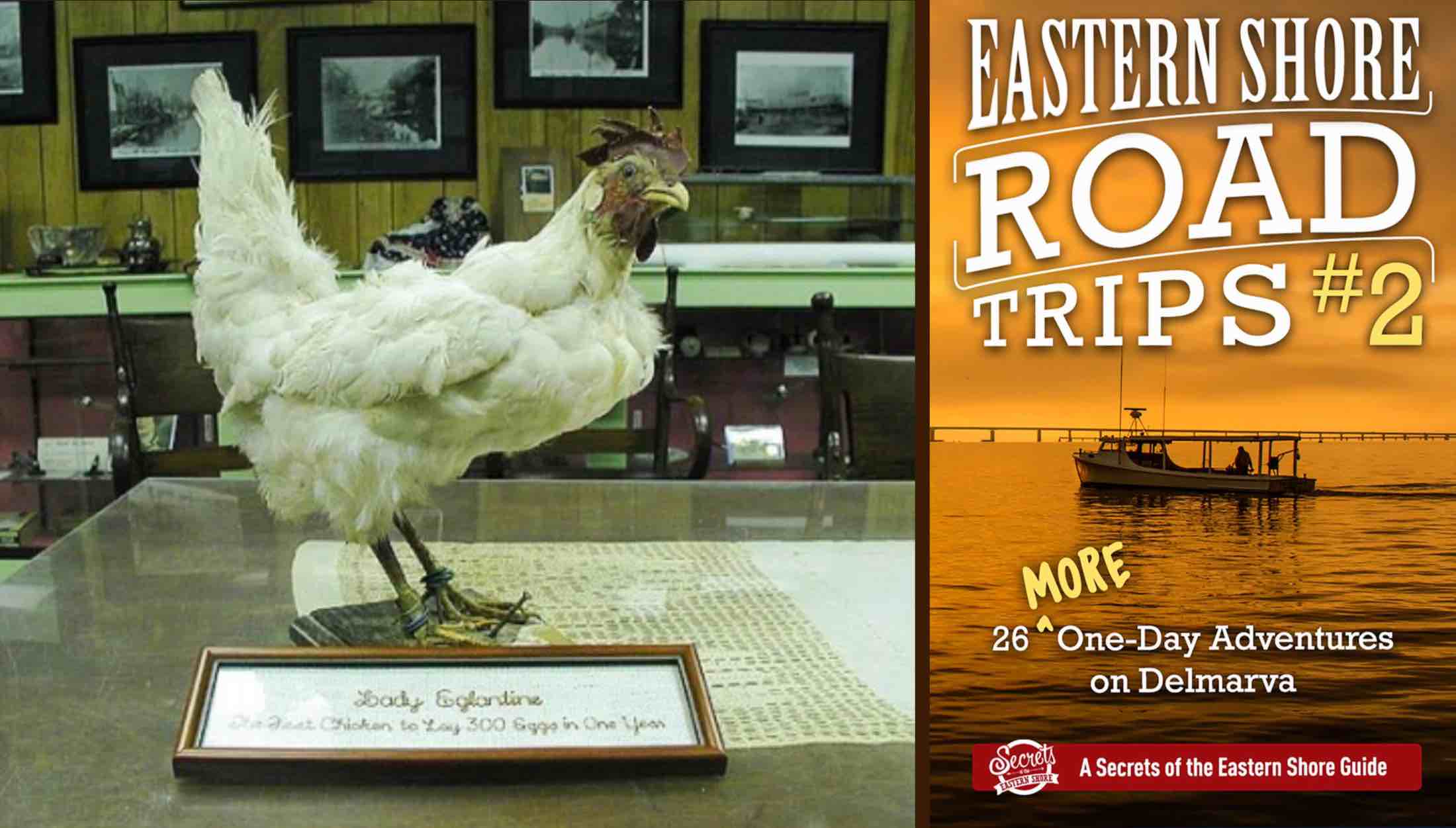 WAY BACK MACHINE: On the Trail of Lady Eglantine, the Miracle Hen of Greensboro

Home / Way Back Machine / WAY BACK MACHINE: On the Trail of Lady Eglantine, the Miracle Hen of Greensboro

This excerpt from Eastern Shore Road Trips #2: 26 MORE One-Day Adventures on Delmarva is a bonus section that comes at the end of a road trip chock full of other interesting stories that are set along the backroads of Caroline County, Md. between the towns of Preston and Denton.

Pretty little Greensboro, Md. lies just a few miles north of Denton. That this place is chock full of interesting stories will become apparent to anyone who steps inside the town’s historical society and checks out the old photos and displays about shipbuilding, canneries, and numerous other topics.

My focus here, however, is on one specific item, the taxidermied carcass of a century-old chicken. Lady Eglantine was born on April 15, 1914. While her name has the ring of European royalty, it’s actually a reference to a farm outside of town with an abundance of the wild pink roses that go by that name.

Addison A. Christian, the man who owned Eglantine Farm, was a hobbyist from Philadelphia who liked playing around with the latest developments in growing crops and raising farm animals. One of those games was a chicken-and-egg affair. Lady Eglantine stood just 14 inches high and weighed in at less than 4 pounds, but she had been bred for fertility stardom. Christian had high hopes when he entered her in an egg-laying contest.

Run-of-the-mill hens back then laid about 70 eggs a year. Lady Eglantine laid 314 eggs in the calendar year of that contest, a feat that earned her a place in the Guinness Book of World Records. It’s comical, how much attention this generated in newspapers and trade publications. When I plugged “Lady Eglantine” into a database of old newspapers, the query generated hundreds of hits from scores of papers stretching from Maine to California and pretty much everywhere in between. This fowl lady had nicknames aplenty in those stories—“The $100,000 Hen,” for one example, and “The Wonder of the 20th Century,” for another. Her eggs sold for $60 apiece.

The Victory Tour of Lady Eglantine

Lady Eglantine went on a victory tour after setting that new record. Her most famous stop was the Empire Association Poultry Show in New York City, held at the Grand Central Palace exhibition hall. In advance of this December 1915 show, Christian brought Lady Eglantine to Philadelphia and made a big deal of putting her up in a suite at the Hotel Walton. The next morning, Lady Eglantine was escorted from the hotel to the train station by a cadre of motorcycle police. Spectators lined the streets. When Lady Eglantine passed by, the men in that crowd removed their hats in a show of respect for her fertility prowess. As she entered the train station, an orchestra performed from the balcony.

Lady Eglantine traveled to New York with an entourage that included no fewer than 21 men, including several security guards and a private chef. The journey from Penn Station there to Lady Eglantine’s accommodations at the Hotel Imperial involved a special coop awash in pink roses, a fancy car owned by a vaudeville actress, and a sightseeing bus for her entourage. In its reporting on this VIP visitor, the New York Times described the events as “more factitious fuss than is customarily accorded the prima donna of a royal opera company.”

Lady Eglantine died on Aug. 6, 1916. Christian took her body to a Philadelphia taxidermist and then gave her a resting place on his library table, which is where she stayed until he died in 1926. Somewhere in the years since then, she found her way to the Greensboro Historical Society, where you are welcome to stop by and pay your respects.

• You can find the Greensboro Historical Society at greensboromdhistoryc.ipage.com or on Facebook here or at 410.482.2100.

• Here is where you can learn more about the book Eastern Shore Road Trips 2: 26 MORE One-Day Adventures on Delmarva, including where to buy it in stores and online.