The Day They Bombed the Old Holland Island Bar Light

The old Holland Island Bar Light was one gorgeous piece of work. Built in 1889 to mark the way into Holland Strait and Tangier Sound, it was a screwpile affair topped with a hexagonal cottage. It stood a little ways south of Holland Island back when people still lived on that little scrap of land between Bloodsworth and Smith islands.

On Feb. 19, 1957, Holland Island Bar Light came under attack by U.S. Navy bombers. Four people were aboard the lighthouse when the bombs started falling. It is unclear from the sketchy reports I’ve seen what the exact mix in that crowd was among keepers, maintenance workers, or others. Needless to say, they all scrambled for cover. All of them seem to have escaped serious injury.

It was all a training exercise gone horribly wrong. The three ADSN Skyraiders from the Naval Air Station in Atlantic City, NJ were supposed to bomb the Hannibal, a decommissioned ship that the Navy had sunk in the middle of the Bay years before for use as target practice by pilots in training.

Still, it’s a bit hard to fathom. The wreck of the Hannibal is maybe 15 miles away from Holland Island Bar Light. And the Hannibal was a 274-foot-long hulk of an 1898 coal freighter sticking out of the water. The lighthouse was itty bitty by comparison, reaching a height of just 42 feet above the waterline.

The rockets the Skyraiders shot that day tore holes through the roof and walls of the cottage. Had those rockets been armed, the lighthouse would have been blown to kingdom come.

What makes this story even crazier is the fact that this was the second time the same lighthouse came under the same kind of attack. The other incident happened in 1951. Tom Serres was one of two 19 year olds aboard the light that day—the two of them were busy painting the trim on the 25-foot lighthouse boat when a sudden series of swooshes and kerplunks filled the air. Clouds of sand and mud from the bottom of the Bay shot up out of the water a second later, the splashes making a mess of their careful paint job.

Years later, Serres wrote about the incident in the magazine Lighthouse Digest. He says that the batch of ADSN Skyraiders that bombed him came from the Patuxent River Naval Air Station on the Western Shore, not Atlantic City. 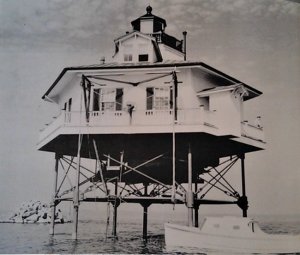 Serres and his co-worker sprinted into the kitchen of the lighthouse and tried to raise help on an antiquated radiotelephone. Can you imagine how crazy the message must have sounded as their voices went out over the airwaves that day in 1951?

“Mike Nan 18, Mike Nan 18, to anyone listening! We are being attacked by low flying aircraft! They are dropping bombs all around us!”

The Skyraiders eventually flew off. Serres suspects that they had come to realize their mistake.

“One of the pilots made a low pass over the lighthouse and dipped his wings,” Serres says, It was “as if to say, ‘Holy cripes, we made a mistake. Sorry ‘bout that.” Serres says he wrote about the incident in the lighthouse log but that he never saw anything in the newspapers about incident.

The 1957 attack, by contrast, apparently got quite a bit of coverage. I would love to spend of few minutes one of these days to go back and read those accounts. Holland Island Bar Light stood in its original form for only a couple of years after the second attack. Its cottage was torn down in 1960. An automated light was installed on the old screwpile foundation—and it’s still there today, as you can see in this photo.

Also still out there today is the Hannibal. It lies northwest of Smith Island, a little ways above of the Maryland-Virginia line. I haven’t seen it myself, but here is a report saying that its hull is riddled with bullet holes and parts of its smokestacks and bridge have been blown apart.

If you go, you’ll probably see a bunch of fishermen out there. The old wreck is supposed be a great spot for rockfish, croakers, spot, and drum. And no worries: The boat is no longer used for Navy target practice.

• Here is the Lighthouse Digest article I mentioned. There is also a brief account of these two incidents in the book “Holland Island: Lost Atlantis of the Chesapeake.” That is where the close-up photo of the lighthouse here appeared.