By Secrets of the Eastern ShoreFebruary 15, 2022No Comments

The scene that unfolded on a late-winter night in 1900 on Hog Island was straight out of the Alfred Hitchcock classic The Birds. A flurry of unusual avian activity was in the air along the Atlantic Flyway that February, thanks to a long, unseasonable stretch of warm weather that fooled bevies of birds into starting their northbound spring migrations earlier than usual.

A barrier island off the oceanside of Virginia’s Eastern Shore, Hog Island sits right along that flyway. The lighthouse there was an 1893 beacon built in a style known as “pile design,” with nine iron legs splayed around a central cylinder. Birds often have trouble around lighthouses, as blinking beacons in the dead of night can leave them disoriented.

Here, for example, is a description of that odd behavior written by George Sterling, whose term as assistant keeper on
Hog Island came a few years after the 1900 incident at the heart of this story.

The birds insensibly head for the light, and as the lantern turns on a pivot and flashes every forty-five seconds, the extreme glare blinds and bewilders them, and they strike with such force against the reflector that sometimes every bone in their body is smashed.

A Bevy of Brants Lose Their Minds

By the time Sterling arrived at Hog Island, the light atop that 190-foot-tall tower had been encased in thick wire netting. This was done in the aftermath of the avian assault that unfolded on Feb. 22, 1900. From the book, The Lightkeepers’ Menagerie: Stories of Animals at Lighthouses:

A frenzy, the cause of which was unknown, broke out. Birds began to fly at the lighthouse and slam the walls and lantern. They came with such force the keepers thought they were bent on destroying the lighthouse. Repeatedly, in waves, they bombed the lantern like kamikazes, shattering the glass windows and striking the expensive prism lens.

Keeper George Doughty and an assistant sprinted up the stairs to the top of the lighthouse, where they commenced trying to shoo away the invaders with waving arms and loud noises, thinking this would do the trick. They were wrong. 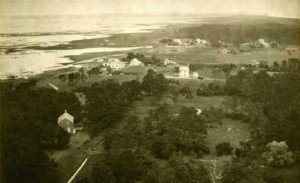 All-out war erupted. Shouts and banged pans soon gave way to clubs and sticks. Then, shots were fired in the air. When this failed to repel the feathered raiders, the guns were turned on the birds.

The two keepers ran out of ammunition. They gave up the fight after that, taking cover in a protected alcove below the lantern. When they emerged at dawn, bird carcasses covered the catwalk around the lighthouse tower. Below that, on the ground, bird bodies “littered the earth like confetti.” Many of the poor things were still twitching in agony.

The keepers dug a trench and tossed the birds into a mass grave. Amazingly, the light was still shining. I have come across conflicting reports about whether the follow-up assault happened the very next night, or a couple of days later. The keepers did nothing this time around, and the birds retreated much more quickly than they had on the first assault. But the damage done in that second attack put Hog Island Light out of service for a stretch.

It’s only fitting, I think, to take a moment here to pay tribute to those unfortunate birds. Most of the dead ones that night were American Brants. These small geese, with black heads and white necklaces, make annual migrations that are unusually long and arduous for their kind, running between the upper reaches of the Canadian Arctic and the southeastern U.S. coast. 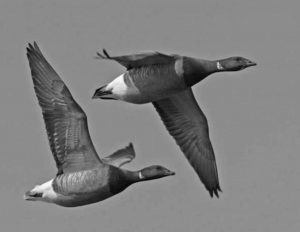 In his 1908 book, The Huntsman in the South, outdoorsman Hunter Alexander shares a different, but related memory from a night he spent staying at the lighthouse on Hog Island. A terrible storm was blowing when an assistant keeper rousted Alexander from his bed and told him to climb up into the tower. Most of the stairway they took was exposed to the stormy elements.

The full force of the raging wind, filled with sleet and snow, struck us with such force that we staggered like drunken men. Inch by inch we worked and battled our way until we reached the tower.

Safe inside that warm refuge, Alexander watched as brants circled the light in a state of utter confusion.

It was a sight worth taking a long journey to see. The brant, the shyest, wildest, most timid of waterfowl, were within five feet of us, but, evidently blinded by the light, they could see nothing. Some would circle around the tower, others dart by; and wonderful to relate, some would remain stationary in the air, their wings moving so rapidly that they were blurred like a wheel in rapid motion. I thought at the time what a tremendous power must lie in their wings to enable them to nullify the wind … blowing sixty-five miles an hour. 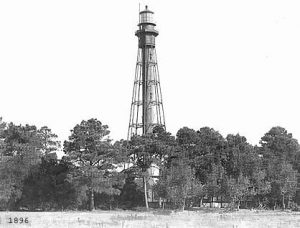 What a treat to be able to gaze on those wild birds … when they were free and unfettered in their native element, two hundred feet above the earth! The lamp in the tower revolved every forty-five seconds, [so that every bird spent] a short time in the vivid glare, which displayed every graceful curve of neck and head, and the set and balance of the body, and enabled one to
look into their brilliant eyes.

The brant is not a glossy, showy bird like the wood duck or mallard, but in the driving rain and under the powerful rays of the lamp they were exquisitely beautiful; their plumage looked like ebony, and the tints changed to many an iridescent hue. It was enthralling to watch them dart in the midst of the … refulgent gleams, one second vivid and tangible, the next swallowed up in … darkness.

After two hours spent in the tower I returned to bed, and in my dreams I could still see the darting, circling brant. Nature
has richly endowed Hog Island. I question whether there is any other one spot on earth where fish, flesh, and fowl are more abundant.

Postscript: Hog’s Light, Across the Bay 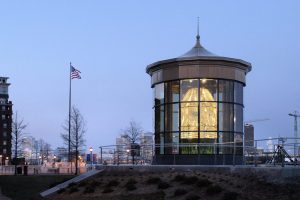 The Fresnel lens from Hog Island Light on display in Portsmouth, Va.

The light that shone from Hog Island in those days was a classic—a massive First Order Fresnel Lens that stood 10 feet tall, weighed 2,500 pounds, and had 368 unique prisms. Today, this rare relic of the past has an estimated worth well over $1 million.

The lighthouse was demolished by dynamite in 1948, but that lens was saved and eventually given to the Mariners Museum in Newport News, Va. From there it went on loan to the western shore city of Portsmouth, where it landed in storage for many years but eventually ended up on display in that city’s historic district.

A 2004 article in Lighthouse Digest recounts the meticulous efforts to repair and restore that lens for public display in a glass enclosure along the Portsmouth seawall. At the very end of the piece, the author makes mention of the bird attack in 1900.

This tale might account for some of the damage now visible in the lens. But against all odds, this striking work of art and technology has survived and will shine for many years to come.

The last of Hog Island’s human residents fled for the mainland after a run of brutal hurricanes and floods in the 1930s.
Modern-day brants don’t have to worry about man-made hazards, as the island is now owned by the Nature Conservancy and managed as a bird sanctuary.

–Posted by Jim Duffy for Secrets of the Eastern Shore/Whimbrel Creations LLC, first in a short version in 2019 and then in a full book excerpt on Feb. 15, 2022. Again, you can find more information about You Wouldn’t Believe: 44 Strange and Wondrous Delmarva Tales–including how and where to buy it–at this link.