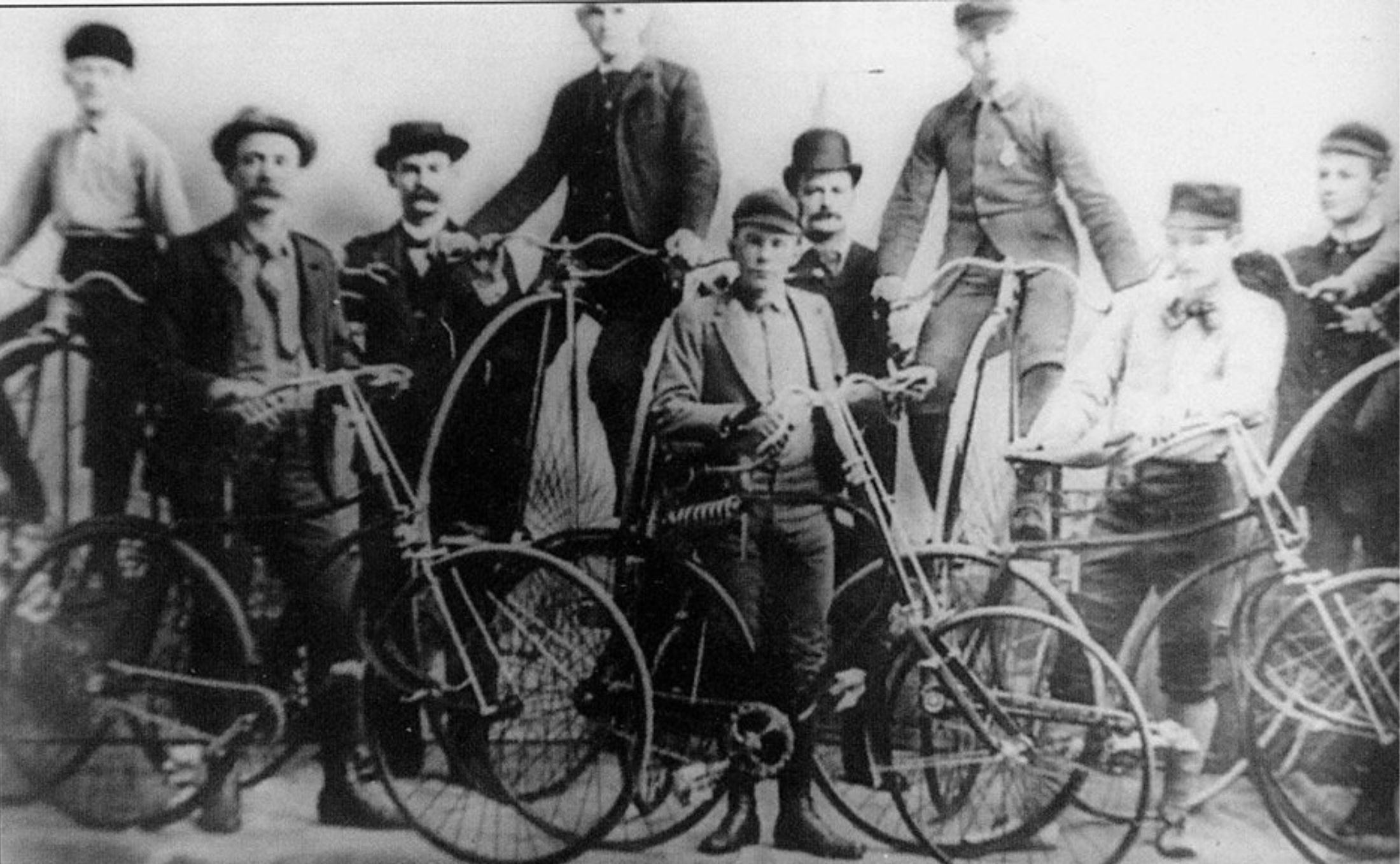 1896: When Thousands of Racing “Wheelmen” Descended on Cambridge

Home / Way Back Machine / 1896: When Thousands of Racing “Wheelmen” Descended on Cambridge

Nearly 2,500 athletes are in Cambridge, Md. on the weekend I am posting this. They are here to tackle a grueling Ironman race that includes a 2.4-mile swim, a 112-mile bike ride, and a 26.2-mile marathon. The hotels are full, not just in town but up and down the road in nearby towns, too. Lots of locals are renting out spare bedrooms. The YMCA has RVs in its parking lot and tents on its lawn.

But this is not the biggest sporting event the town has seen—that honor belongs to races and rides put on by a statewide bicycling club, the Maryland DivisionWheelmen, in 1896. Between 5,000 and 10,000 riders–depending on which account you read–rolled into “Groove City” during the 4th of July holiday that year. The event fell in the midst of a nationwide craze over bicycling.

I spent a few hours recently digging out old newspaper coverage of that event, which received prominent front-page coverage in the Baltimore Sun over the course of several days.

The wheelmen and citizens of hospitable and beautiful Cambridge have made this first day of the Maryland Division meet of 1896 a continual round of pleasures as varied as delightful. Since the early morning everybody has been extremely busy having a good time.

Bicyclists came from the Western Shore aboard a string of steamboat trips scheduled especially for them. Two boats left Baltimore on July 2, four left Baltimore on July 3, and two more left in the early morning hours of July 4. At least one other boat came from St. Mary’s, Md. on the western shore. Riders also arrived from points north via a bunch of extra trains that rolled into town from Seaford, Del.

At 6am, the … steamer Tivoli arrived with 500 cyclists and their friends on board. A delightfully cool breeze was blowing off the water as the excursionists came ashore, and leaping upon their wheels they came gliding swiftly up the smooth, shady High street to their hotels or boarding places.

The Cambridge Cycling Club in the 1890s

Both days of the meet included competitive racing, casual rides, and big parties. A short, one-third-of-a-mile-long racing track—the “only one in the state of the latest type”—was surrounded by bleachers that could seat more than 3,000 fans. On the afternoon of July 3, the president of Baltimore’s Continental Bank, Wilbur Jackson, invited the cyclists to ride 10 miles or so out in the countryside to visit to his waterfront summer home at Castle Haven, where he had a Baltimore caterer serve lunch on “large tables under the shady trees on the lawn.” At a welcome reception in town on the courthouse green, the host town’s official “greeter,” Alonzo L. Miles, told riders: “The freedom of the city is yours. Our homes are open to you and our hearts will respond to your every reasonable desire while you are with us.”

Here is a newspaper description of the grand ball that began at 10pm on July 3: “At the end of Long wharf, an island almost fully one-eighth of a mile out in the Choptank, connected only with the main land by a narrow causeway, the new dancing pavilion is lighted with many colored lights and presents a beautiful picture from the main. It seems an enchanted palace resting upon the placid water of the river whose brilliant lights are reflected in myriad sparkles in the water.”

The whole town was decked out in welcoming fashion for the Wheelmen. In addition to everpresent swaths of red, white, and blue and the state colors of orange and black, there were “Chinese lanterns by the thousands swinging in the breeze from the broad verandas, the eaves off the houses, in the trees, and everywhere.”

On July 4, the wheelmen made a meandering “grand parade” along a dozen different streets in town. In addition to standard bikes, there were tandem, triplet, and quadruplet contraptions on display. The parade ended on the waterfront, where 100 bushels of oysters and 10 barrels of crabs were waiting. 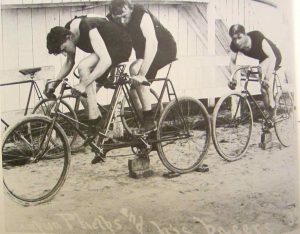 Every spare space in town was used to accommodate guests: One hotel even “obtained the use of two large school buildings, which have been filled with cots. Still, not everyone had a perfect trip: A group from Baltimore called the “Clifton Wheelmen” thought they had hotel rooms secured, but instead “some of their number were accommodated by farmers while four slept in the county jail through the kindness of officials.”

The most exciting race of the meet was a two-mile division championship in which two of the top contenders hailed from Cambridge. Their names were W.W. Phelps and W.G. Lecompte and you can see them in the photo here where three riders are demonstrating racing techniques aboard bikes set on blocks. LeCompte is far left; Phelps is far right.

The rivalry between the two Cambridge men is so great that the town is practically divided into rooters for one or the other. When the race ended, their friends, eager to learn the decision, jumped over the stands and swarmed up on the track. When Phelps was declared the winner, pandemonium broke loose. Elderly men threw their hats in the air, others turned somersaults and cheer after cheer was given.

–posted by Jim Duffy on Sept. 27, 2019 for Secrets of the Eastern Shore/Whimbrel Creations, LLC. All rights reserved.