Sweet scenes abound on the long ride out to Hoopers Island. The landscape of remote south Dorchester County—an area that the locals call “Down Below”—is a glorious run of marshlands, rivers, and farm fields. Along the way you will find a pair of churches in Golden Hill, Maryland that go by the name St. Mary Star of the Sea.

They are hiding along a bend in Route 335, under a stand of towering trees. The older of these buildings dates to 1767 and ranks among the oldest structures in the county. The “new” church went up in 1872. I wrote this after stopping by and visiting both interiors during a special event celebrating the history of the church. You can stop and admire the exteriors and wander the grounds anytime. (I will also include some nearby attractions in the notes at the end here.)

Let’s start with the older of these two buildings. The stories that this little piece of history in Golden Hill has to tell are straight out of James Michener’s Chesapeake. Do you remember the Steed family in that book? They’re the ones who built a little Catholic chapel on fictional Devon Island. 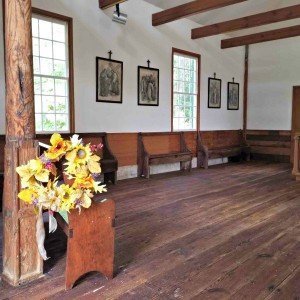 Author James Michener placed Devon a little way north of here, in the Choptank River. The story of the Steeds’ steadfast commitment to their faith through many generations, even in the face of social disapproval and legal discrimination, is one of the novel’s central plotlines. Among the most famous scenes in Chesapeake, in fact, is one where a priest, Ralph Steed, engages in a debate with a Quaker, Ruth Brinton, over matters of faith, prayer, and slavery.

Like the fictional Steeds, the real-life Tubman family dates its arrival hereabouts to the mid-1600s. Richard Tubman came from England and settled first in St. Mary’s County on the western shore of the Chesapeake Bay. He moved to Dorchester County in 1669. Many European arrivals from this period had names that still loom large in this area today. In addition to the Tubmans, there are the Dunnocks, the Shentons, the Meekinses, the Gootees, and the Applegarths, among others.

Richard Tubman seems to have played a big role in subduing the local Indians during the periods of tension between natives and new arrivals that broke out now and again in those years around Golden Hill. The New Revised History of Dorchester County has the state government awarding Richard Tubman land on one occasion as a reward for “military services against the Indians” and tobacco on another for “services in an expedition against the Nanticokes.” 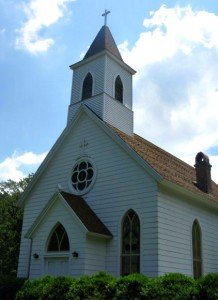 Tubman ended up owning 1,000 acres. He named his plantation St. Giles Field, which could mean he hailed from St Giles Parish in London. Like the Steeds in Chesapeake, the real-life Tubmans owned slaves, though I don’t know how many, as the summary I came across of items in Tubman’s estate mentions only “some negroes.”

Catholics were few and far between in these parts back then. Historians have speculated that the farmhouse at St. Giles Field served as the site of religious services before any formal churches existed in the area. Those services would have happened only rarely, when an itinerant priest would pass through this remote area.

One of those so-called “circuit riders” charmingly referred to this area as “ye islands of Dorset” and mentioned visiting Hoopers, Taylors, Barren, and James islands in addition to mainland outposts like St. Giles Field. Here is another echo of Chesapeake. In the novel, Devon Island keeps shrinking over the centuries, a victim of the one-two-three punch of erosion, land subsidence, and sea level rise. In the end, the fictional Steeds are forced to abandon their beloved home.

This, of course, is what happened in real life to the families that used to live on Barren and James islands, which are now uninhabitable. Hoopers and Taylors are still plenty big enough for people to live on today, but they, too, have been shrinking for centuries.

As I mentioned, circuit rider priests came to places like South Dorchester only rarely. More often, Catholic families would have boarded their boats for a lengthy voyage out the Honga River, across the Chesapeake Bay, up the Potomac River, and into the St. Mary’s River to attend masses at St. Inigoe’s, which was founded by the Jesuit order of priests in the 1640s and ranks today as the oldest Catholic parish in the country. Journeys like that, too, are featured in Michener’s Chesapeake. 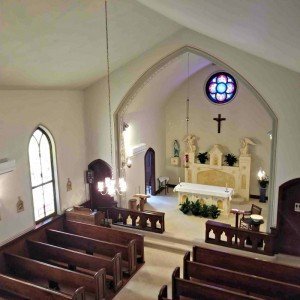 One interesting detail I came across in my research here brings us back to the occasional bad blood that arose between Europeans and Indians. During those periods, the Catholic families would load up all of their livestock onto their vessels during those journeys to church, out of fear that the animals might be stolen and slaughtered in their absence.

Tubman and his wife, Eleanor, had one son, Richard II. This second Richard, it seems, grew weary over time of the rigmarole involved in those long trips from Golden Hill to St. Inigoes. Or perhaps he saw late in his life that there were finally enough Catholics around to form a genuine congregation. In any case, a few years before he died at age 69, he built what is now called Tubman Chapel. Like the Steeds in Chesapeake, he erected it on his own land. That’s the smaller of the two buildings that await along Route 335, and it’s not a replica—it’s the 1767 original, as everyone nowadays calls it “Tubman Chapel.”

The “new” 1872 church is across the street. After it went up, Tubman chapel did duty as a one-room schoolhouse for several decades and then as a barn for several more. It was restored in 1976, a project financed by a woman named Annita Applegarth France, who, appropriately enough, was a direct descendant of Richard Tubman’s.

When I stopped by on a recent First Saturday, there were five friendly parishioners on hand to greet visitors, care for the grounds, and tackle other tasks. I small talked with this friendly group about some of the gardening challenges they were trying to work though. Then one of them walked me through some exhibit materials about the church’s history. Another opened up the “new” church for me, while a third led me across the street and into the “old” chapel.

You can see from the photos here that both are gorgeous little buildings. They are worth a stop, even if just to admire the exteriors and walk about the adjacent graveyard.

One big-picture story to think about here concerns the growth of the community. As beautiful as the chapel is, it’s a simple one-room affair. The “new” church is a more complex structure that shows the influence of the Gothic revival movement in its bell tower, its stained-glass windows, and its wrought-iron fence. Not only did the community here grow bigger between the late 1600s and the late 1700s, it also grew more connected with the outside world, and more concerned about presenting itself as a cultured and civilized place. 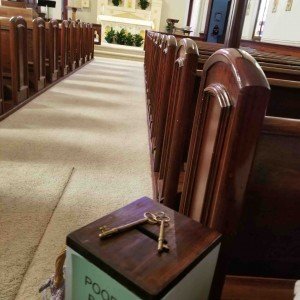 The stained-glass windows in the new church are clean and elegant. One of them honors the memory of Mother Mary Borgia Tubman, who was born near here in 1824 and grew up to join the Visitation order of Catholic nuns and play a key role in the founding of Catholic schools and convents in Virginia and West Virginia. (So far, I have not been able to figure out whether or how this Tubman is related to the first and second Richards.) Keep an eye out during your visit for interesting details. The skeleton key that was sitting out on the poor box inside the “new” church during my visit still functions as the key to the building.

During my visit to the chapel, the conversation with a parish volunteer focused on how incredibly narrow the seats of the benches were. “People must have had tiny heines back then,” my guide said with a smile.

I will leave you here with one last story from days gone by. One of the tidbits I came across in the exhibit area was a newspaper writer’s summary of an 1880s diary entry by an itinerant priest, Father Henchy, who was based at St. Joseph Church in Cordova, Md. Here is that account of his cold-weather journey to “ye islands of Dorset:”

Father Henchy “arrived safely from Dorset Tuesday night at seven o’clock,” but so benumbed and frozen that he could hardly speak … if it had not been for the hot bricks he would have died on the way … [He reported] that he got along pretty well except where his horses had to skate on the ice on the road and fell down several times, smashing up the ‘tongues’ and the harness. The same letter says upon arriving [back at] Cordova, he had to immediately go to Kent County on a sick call.”

NOTE #1: The church is located at 917 Hoopers Island Road. The postal address is Church Creek, Maryland, but the physical location is just below Golden Hill.

Also in the area: Blackwater National Wildlife Refuge, The Harriet Tubman Underground Railroad Visitors Center, and the aforementioned Hoopers Island. If you ride onto Hoopers after visiting the churches, you should try to time it so you can have lunch at Old Salty’s. Lots more visitor information from Dorchester County Tourism is here. 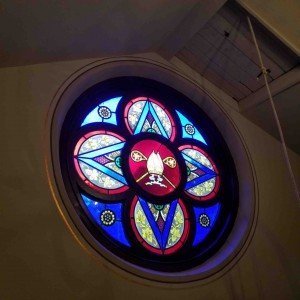 NOTE #2: Whether or not you go to Hoopers Island you will enjoy this piece of local history. It features what may be the greatest ribbon-cutting speech by a politician in the history of mankind. Also, a couple of years back, I wrote this piece about traveling to South Dorchester County and visiting its islands.

NOTE #3: Last but not least, I would like to thank my friend Michael Michaud for insisting that I look into the stories surrounding Tubman Chapel and St. Mary’s Star of the Sea.