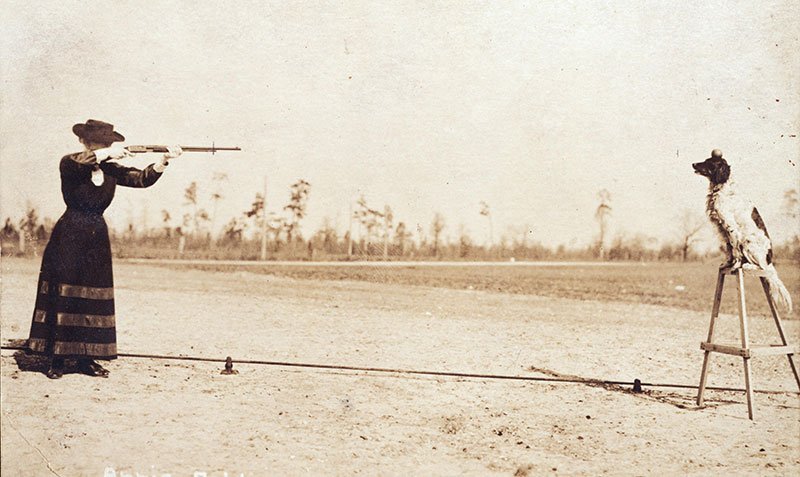 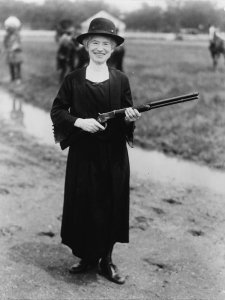 Sharpshooters Annie Oakley and Frank Butler were already famous stars by the time they found their way to Maryland’s Eastern Shore back in 1912. In fact, they were ready at that point to call it a career and retire altogether from the traveling-Wild-West-show business.

From what I’ve read, it was Butler’s idea to settle on the Shore. After visiting Cambridge on one of their endless tours of the East Coast with a circus-like Wild West Show, Butler described the town as a “sportsman’s paradise” with “four banks, several fine churches, but no saloons.”

They had a retirement home specially built for them up on Bellevue Avenue, facing the mile-plus-wide Choptank River waterfront. Pretty much everything in the house—sinks, kitchens, etc.—were built to fit Annie’s diminutive 5-foot-and-nothing stature. Oral tradition has it that the pair had the unusual second-floor porch put in so that they could climb out of their bedroom window when the urge struck and bag a few waterfowl.

Annie and Frank helped raise money for the Dorchester County Fair. They even came out of retirement to put on shooting exhibitions for fairgoers. Annie wrote her first autobiography while in Cambridge. It had the rather dry title, “Powders I Have Used.” She also wrote lots of magazine articles and continued working on her life-long campaign to encourage women to learn to shoot.

But after a lifetime on the road with those traveling Wild West shows, retirement didn’t seem to agree with Annie and Frank. They grew restless pretty quickly. A year after moving in, they packed up a niece and embarked on a cross-country automobile adventure.

The biggest problem was that Annie never really warmed to life in a traditional home. Frank described her as a “rotten housekeeper.” He added that “her record in this department was [going through] seven cooks in five days”–an impressive showing, indeed. 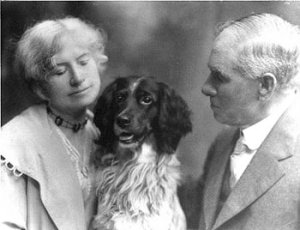 Even Annie herself confessed: “I went all to pieces under the care of a home,” she said.

The Butlers sold their Cambridge home in 1917. The building still stands today, at 28 Bellevue Avenue. It is on the National Register of Historic Places. If you go see it, please keep in mind that it is a private residence and not open to the public. (Here is a map.)

The thing about Cambridge that probably lasted the longest in the life of Annie and Frank was their dog, Dave. The white English setter became part of the Wild West act when Annie and Frank came out of retirement. As you can see in the photo up top, Annie would shoot an apple off of Dave’s head. The couple used to send Christmas cards with the dog’s picture, and they were all signed, “Dave Butler.”

After poor Dave was killed by a car in Florida, Frank wrote a story titled, “The Life of Dave, As Told by Himself.”

Annie died of anemia on Nov. 3, 1926. Frank followed her across the great divide just 18 days later. Legend has it that he was so heartbroken without Annie in those last weeks of life that he just stopped eating. They are buried together at Brock Cemetery in Greenville, Ohio. 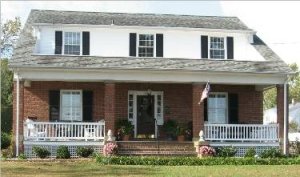 • Here is the Wikipedia entry on Oakley.
• Here is a good article by Steve Delsordo from the website of the Dorchester County Public Library.
• Here is video footage from 1894 (!) of Oakley in action.
• And here is a collection of famous quotes by Annie—the best one goes like this: “I ain’t afraid to love a man. I ain’t afraid to shoot him, either.”
• The photos here come from a bunch of different history-oriented websites.