By Secrets of the Eastern ShoreJuly 26, 20222 Comments

Home / From the Books / The American Theater Was Born in … Pungoteague, Virginia?

This is a free excerpt from my book, You Wouldn’t Believe! 44 Strange and Wondrous Delmarva Tales. More info about that and my other books exploring the history, travel, and culture on the Eastern Shore and in Delaware here.

On a summer night in 1665, he ventured out to Fowkes Tavern near Pungoteague, Va. and found himself watching two actors put on an entertainment called “Ye Bare and Ye Cubbe.” Translation: “The Bear and the Cub.”

Two things make Martin’s seemingly mundane outing worth our attention. First, the show is the first appearance in the historical record of a theatrical performance in the colonies—yup, the American theater was born on Virginia’s Eastern Shore on Aug. 27, 1665. Second, that same occasion marks the birth of American theater criticism.

To say that Edward Martin did not enjoy the show would be an understatement. Lacking the ability to pick up his cell phone and vent on Facebook or Twitter, he elected to march over to the local magistrate’s office and demand that everyone involved in the production be arrested. The accusation was “public wickedness,” a colorful legal term that was used back then, basically as a synonym for blasphemy.

That magistrate did what Martin asked. Actors Cornelius Watkinson and Phillip Howard were tossed in jail. So was the playwright, William Darby. All three were held there for at least a little while. It’s unclear when they managed to post bail and regain their freedom while awaiting trial.

The Plot Is a Mystery

Most folks who’ve looked into this think that Edward Martin was a Quaker, which means he was a member of what was then a tiny religious minority on the Anglican-dominated Virginia shore. There is no surviving record of the details in his complaint, just as there is no surviving script or even plot description for “Ye Bare and Ye Cubbe.”

Various historians have done bits of guesswork about this. One, Joel Eis, chalks it up to politics. He speculates that the play had anti-British undertones that touched on tensions between an upper class that was hyper loyal to England and middle-class merchants who were angry about restrictions placed by the king on the international tobacco trade. To bolster this theory, Eis goes so far as to find a string of pamphlets and speeches from those days that employ the same brand of “parent-fledgling analogy” in the play’s title as a way to criticize the English. 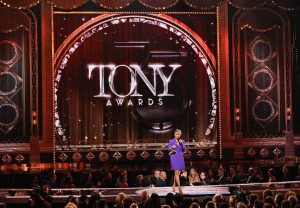 And to think, the road to this began on the backroads of Accomack County …

Another theory puts religion front and center, arguing that Martin may have been arguing that theatrical performances were sinful in and of themselves. At first glance, this might make Pungoteague look backward and intolerant. After all, the date here is half a century past the death of William Shakespeare, whose productions were quite popular back in the mother country during the Bard’s own lifetime.

But the picture is more complicated. Shakespeare died in 1616, but a religiously based backlash against the theater erupted in England starting in the late 1600s. Clergyman Jeremy Collier wrote an influential book-length diatribe that (according to historian David Manning) describes theatrical performances as endeavors “where playwright, player, and audience [meet] to collude in sin” and concludes that “audience appreciation of these plays [is] tantamount to worshipping the Devil.”

In actuality, the mere fact that a play was staged in Pungoteague as far back as 1665 puts Virginia’s Eastern Shore closer to the ranks of open-minded than intolerant. Up in New England, for instance, the Puritans and other Congregationalist sects put plays in the same category as entertainments like cockfighting and boxing, as “forms of levity and mirth [that lead] easily to sin.” They feared that such “public amusements” would infect the “entire community with the corrupt tastes of a few individuals.” As late as 1767, the Massachusetts Assembly would outlaw theater shows altogether. 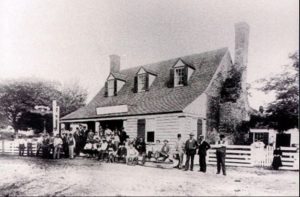 This building stood on the old site of Fowlkes Tavern in the late 1800s.

Perhaps Martin’s objection was as simple as the play being performed on Sunday, the Sabbath. Or perhaps it went deeper—was the content somehow rebellious or sacrilegious? There is a third possibility, too. Some researchers who’ve dug into the “Ye Bare and Ye Cubbe” controversy suspect that the case wasn’t really about the theater at all. What Martin was really up to in this view was getting Watkinson, Howard, and Darby in trouble, over some personal matter. In other words: Perhaps he used public doubts about the morality of the theater as a prop in his own revenge drama.

The Critic Gets a Drubbing

The case has a happy ending. But first, an entertaining detour. This “Bare and Cubbe” contretemps arose a short handful of decades after the beginnings of the Jamestown settlement. Virginia still didn’t have much in the way of governmental infrastructure. For instance, Accomack County had no courthouse in 1665. Instead, itinerant judges heard cases in private homes or makeshift public spaces.

In the case of “Ye Bare and Ye Cubbe,” the hearing unfolded at the scene of the alleged crime, right back in Fowkes Tavern. To add an additional twist, the defendants were ordered to show up wearing “those habilments that they then acted in, and give a draught of such verses or other Speeches and passages, which were then acted by them.”

The playwright and actors performed their play in court on Dec. 18, 1665. The judges saw no evidence of the “public wickedness” that Martin had complained about. Martin didn’t even show up to watch the proceedings and testify. Those judges demanded that he show up soon and provide them an explanation
of his actions. 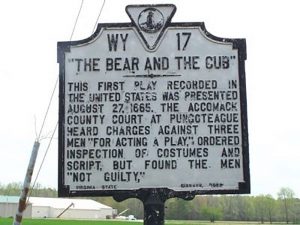 The marker that stands along Bobtown Road today …

Martin appeared on Jan. 16, 1666. This time, it was the judges who played the roles of harsh critics. Here is their ruling (if reading the weird spellings and phrasings in 17th-century prose gives you a headache, just skip the next paragraph):

Whereas Edward Martin was this Day examined Concerning his information given to Mr. Fawsett his Majestie’s Attorney for Accomac County about a play called the Bare and the Cubb, whereby several persons were brought to Court and Charges theron arise from the Court find the said persons not guilty of same suspended the payment of Court Charges, and for as much as it appeareth upon the oath of the said Mr. Fawsett that upon the said Edward Martin’s informacon the charge and trouble of that suit did accrew, Its ordered that the said Edward Martin pay all the charges in the suit.

Translation: The charges against the theater troupe were dismissed. Edward Martin was ordered to pay everyone’s court costs. That’s where the judicial trail runs cold. There is no record of whether Martin actually paid up, or of any other aspect of the case going forward. 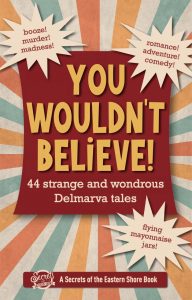 There are 43 other “strange and wondrous Delmarva tales” in the book.

The tale of “Ye Bare and Ye Cubbe” has dropped into obscurity over the years, though it’s still written about now and again in the nerdiest reaches of theater history studies. The lack of solid information in the historical record means it’s hard to draw big sweeping conclusions from the incident about the arts or jurisprudence of early colonial America.

But the play has had a few moments in the sun. In 2007, the Historic Jamestown tourist attraction put on a made-up modern version play, in which the plot was built around that bit of guesswork that it had revolutionary anti-British content. That production was revived a few years ago by North Street Playhouse in Onancock.

The one remnant of the play’s significance that’s always available lies along the backroads of Virginia’s Eastern Shore. The next time you are traveling that way, find your way to Bobtown Road, then slow down as you get a little way below Pungoteague, near the intersection with Michaels Hill Road. There, an old-school sign marks the onetime site of Fowkes Tavern, home to the “first recorded play in English America”—the opening scene in a much larger story that runs right up to the bright lights of Broadway.

–Excerpt from You Wouldn’t Believe: 44 Strange and Wondrous Delmarva Tales posted by Jim Duffy on July 26, 2022 for Whimbrel Creations LLC/Secrets of the Eastern Shore. All rights reserved. Thank you so much for spending a little time with this story and on this site!