17 Delmarva Events to Put on Your 2017 Calendar Right Now

The National Outdoor Show
Golden Hill, MD
Feb. 24-25, 2017
The 72nd edition of this Shore classic will feature a sweet small-town beauty pageant, the World Championship of Muskrat Skinning, and lots of other activities and displays thick with the culture of remote South Dorchester County. (NOTE: On Sun., Feb. 26, the outdoor Crawfish Boil & Muskrat Stew Festival in downtown Cambridge caps off this big muskrat weekend. I can’t find a link to 2017 info on crawfish boil yet, so that links to 2016 info right now–but it’ll give you the idea!)

Most museums purchase a good number of their artifacts and artworks out in the marketplace, but not this one. Just about every piece of memorabilia at the Barrier Islands Center was donated by local families with roots on the islands. This event is the annual showcase of that impressive loyalty to a museum that does a great job of celebrating local culture and history.

This museum-style center honoring the Eastern Shore-born conductor on the Underground Railroad is a joint project of the National Park Service and the State of Maryland. I finagled my way in for a sneak preview a little while back, and I expect it is going to be just great.

Tulip Festival
Lewes, DE
April 6-15, 2017
Lewes celebrates its Dutch heritage with this two-weekend-long festival featuring some 15,000 tulip bulbs around town, along with a slew of associated events. The affair won top honors recently for its population category in the America in Bloom national awards. The Chincoteague Seafood Festival
Chincoteague, VA
May 6, 2017
It happens to me every year. When I try to give you all a head’s up on Facebook that this event is coming up, it turns out that it is already sold out. If you want to go, you might want to just play it safe and buy tickets today. (By the way, the same warning applies to the Chincoteague Oyster Festival on Oct. 7, 2017.)

The Tea Party
Chestertown, MD
May 26-28, 2017
It’s fitting that the town boasting more colonial history than any other on Maryland’s Eastern Shore would host the area’s biggest celebration of life in colonial times. The street theater aspect of the affair is every bit as good as advertised. (NOTE: If you are looking for a Colonial-flavored alternative, I would recommend Dover Days on the first weekend in May.)

The Ocean City Air Show
Ocean City, MD
June 17-18, 2017
This show will be celebrating its 10th anniversary this year by bringing back the Blue Angels, along with several other top-flight civilian and military performers.

The Bathtub Races
Berlin, MD
July 7, 2017
Yes, competing teams really do rig up old bathtubs with axles and wheels. And yes, they really do then climb aboard and fly down Main Street through a throng of cheering, laughing onlookers.

The Pony Swim & Auction
Chincoteague, VA
July 23-27, 2017
If you want to knock this famous affair off of your bucket list this year, it’s probably best to book accommodations now. (NOTE: If you want to see ponies up close in a less crowded environment, there are also spring and fall roundups every year.) The Blessing of the Combines
Snow Hill, MD
Aug. 5, 2017
“Small Town America at its finest!” That is how one online reviewer of this annual event puts it, and he pretty much hits the nail on the head, in my opinion. It’s a fun downtown street festival that celebrates and pays homage to our farmers and their families—and yes, there really is a blessing that involves a man or woman of the cloth and everything. The link here is to 2016 event info, so please remember to double check everything before going.

The Jazz Funeral
Bethany Beach, DE
Sept. 4, 2017
At this fun-loving event on Labor Day weekend, you will get to join in a New Orleans-style jazz parade full of people dressed in grim reaper garb and other funereal costumes as they march down to the beach and quite literally bury the coffin of the summer of 2017 in the sand. Yes, there is lots of Dixieland Jazz involved.

The Skipjack Races
Race in Deal Island, MD
Sept. 2-4, 2017
Race in Cambridge, MD
Sept. 23, 2017
Watch the era of sailing workboats come to life at one or both of these September events. The Deal Island race happens on Labor Day weekend, the same weekend as the famed Hard Crab Derby in nearby Crisfield. The link above on the Cambridge race is to info on the 2016 event, so be sure to double-check it in advance. (NOTE: If you click on that amazing photo by Jill Jasuta of the Skipjack Races, you will be able to find your way to framed or canvas print of it.)

The Sea Witch Festival
Rehoboth Beach, DE
Oct. 27-29, 2017
If you or your kids love Halloween, this can’t-miss affair offers scores and scores of different events, including a humongous costume contest and Halloween parade. As of the time I’m posting this, the website still has 2016 info up, but it will be updated soon enough, I’m sure.

Waterfowl Festival
Easton, MD
Nov. 10-12, 2017
Downtown Easton is transformed into one big museum of wildlife art for this affair that draws throngs of tourists from near and far. Accompanying events include dock dog demos, oyster festivals, street concerts, and more.

The Santa Train
Dec. 2, 2017
Various towns on the Eastern Shore of Virginia
Every year on the first Saturday of December, Santa and the missus hop aboard their special train in Cape Charles and wander up the Shore, stopping at one old small-town train station after another in order to greet the kids and listen to their pleas. The link above goes to 2016 info. Here is the page that should have info on the 2017 event when it gets a little closer. 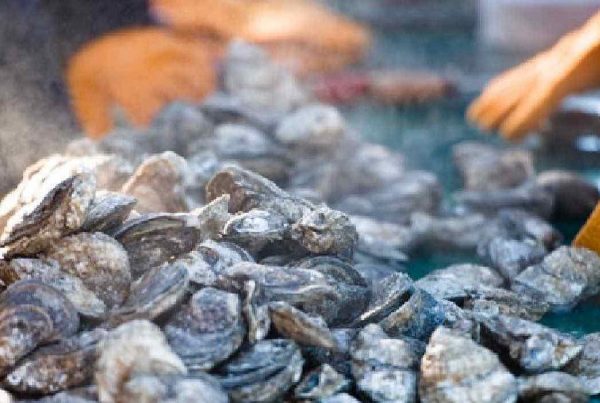